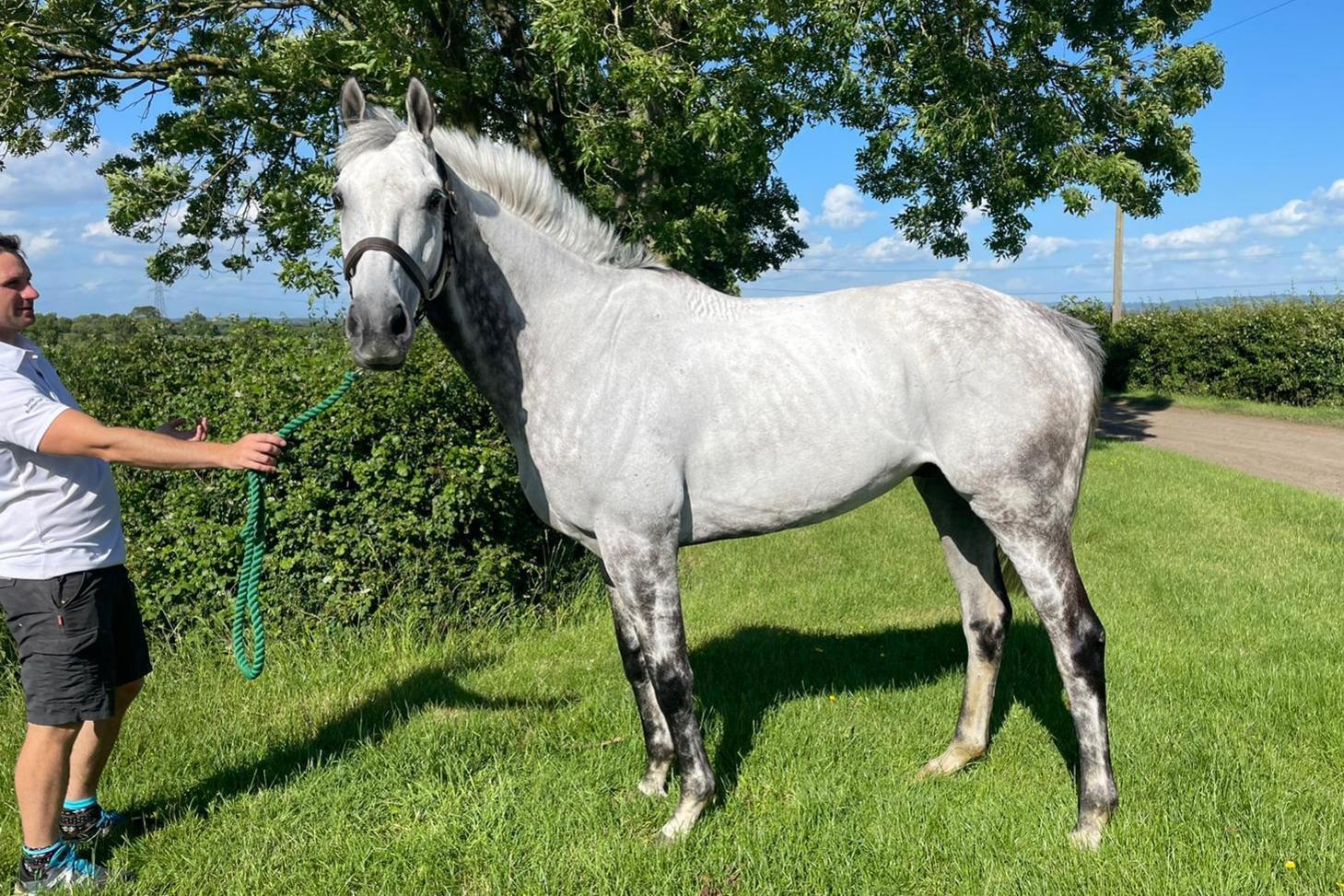 Posted on 8th August 2022 at 10:51
Hi All, DJ here,
Being a thoroughbred racehorse trainer doesn’t really leave a lot of time to practise my batting and sadly a couple of low single-figure scores recently mean I haven’t really troubled the scorer too much, but, on a brighter note, the horses seem to have thrived with this sun on their backs and the Team have enjoyed six winners since my last ramblings, four in the colours of owners Mark Smith, George Houghton and Kathryn Sweeting.

They’re all stars in their own right, but Cardboard Gangster (above) deserves special mention as he has prevailed twice at Perth and Stratford and found only Serjeant Painter too powerful in another contest at the latter venue – in fact that Serjeant Painter, brilliantly tutored and placed by fellow trainer Ben Pauling, has become a bit of an annoying customer as on his previous outing he prevented Getaman getting in the winner’s enclosure for the DJ Jeffreys Racing Club.
However, the Club has enjoyed a brilliant few weeks with Getaman striking on his next outing at Perth, where a plan hatched by myself and fantastic pilot Kielan Woods to put it up to the odds-on favourite First Angel who was carrying a lot of weight came to fruition as ‘the jolly’ put in a challenge two out but was unable to maintain it, and Ayr Of Elegance also did the business for the ‘pink and green’ making all to win at Stratford under the same rider before finishing second at the same track 11 days’ later.
I suppose there are no guarantees in life except death and taxes, but I’m pleased to say that one of my selling points to the club members before they joined was that I thought both their horses would win during the summer and they have duly obliged. In fact Ayr Of Elegance and the ‘G’ bomb have been amazing, running eight times, winning twice, being placed five times and on the other start Getaman was brought down at Huntingdon through no fault of his own and in fact jumping the fence too well and being unable to avoid a faller.
Meanwhile the club, limited to a select group of 30 including ITV and Sky Sports Racing pundit Luke Harvey with only a handful of spaces left, enjoyed a free summer party at Ballards at the end of July.
It was a pleasure to show them all of my horses and meet a few of them for the first time, including Hannah Lewis-Jones and Gordon Bendall, who also have horses with Richard Phillips and Martin Keighley respectively, and Steve Winter who spent a few months as an assistant to “Spitting Mick” Easterby and as one would imagine, had a few amusing tales to tell about his time at the Yorkshire grandee’s.
I’ve said it before and I’ll say it again, but Ballards is such an exceptional place to extract the very best out of horses as it’s such a calming place with lovely facilities and they really seem to thrive on their surroundings.
I was watching them go through their paces the other day with my assistant Paddy, who is a source of inspiration to me due to his years of experience in the game, including as travelling head lad to Jonjo O’Neill, in this lovely summer weather that we and the animals have been enjoying when suddenly it dawned on me that we are only two months’ away from the October Meeting at Cheltenham. Wow!
I’ve already mentioned that we have just a few spaces in the racing club left at a £100 a month all in, but I also have a slightly more expensive option called Ballards Racing with a mere three places remaining and I also have some real dingers that I bought at Doncaster and in Ireland available so if you’d like to come on board Team DJ, please don’t hesitate to get in touch. 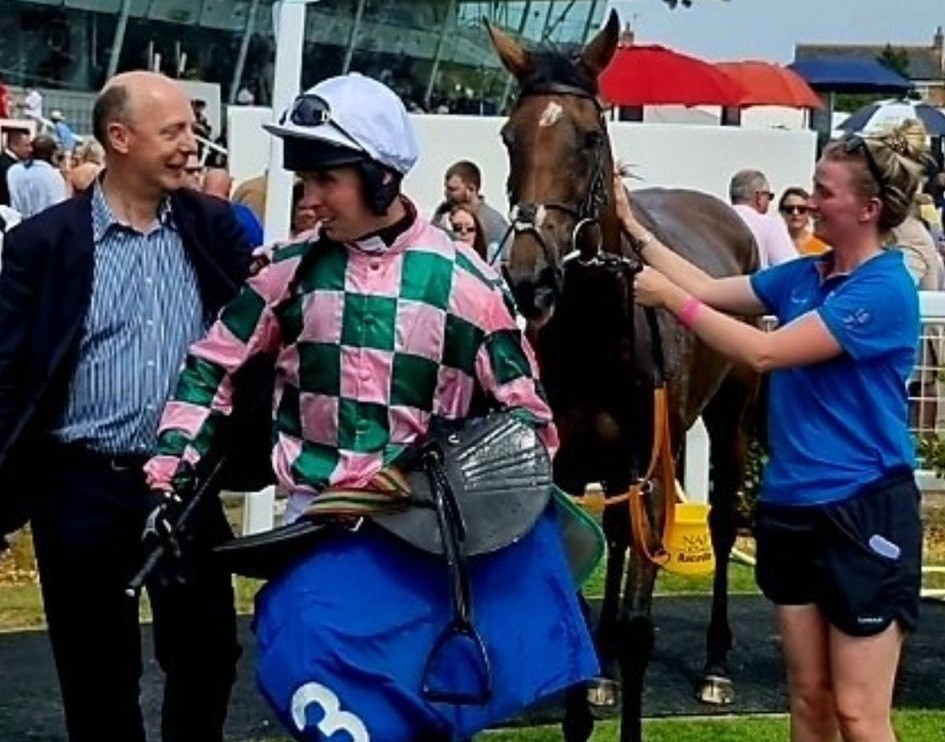 Ayr Of Elegance together with jockey Kielan Woods and travelling head lass Leanne Williamson in the winner's enclosure at Stratford. 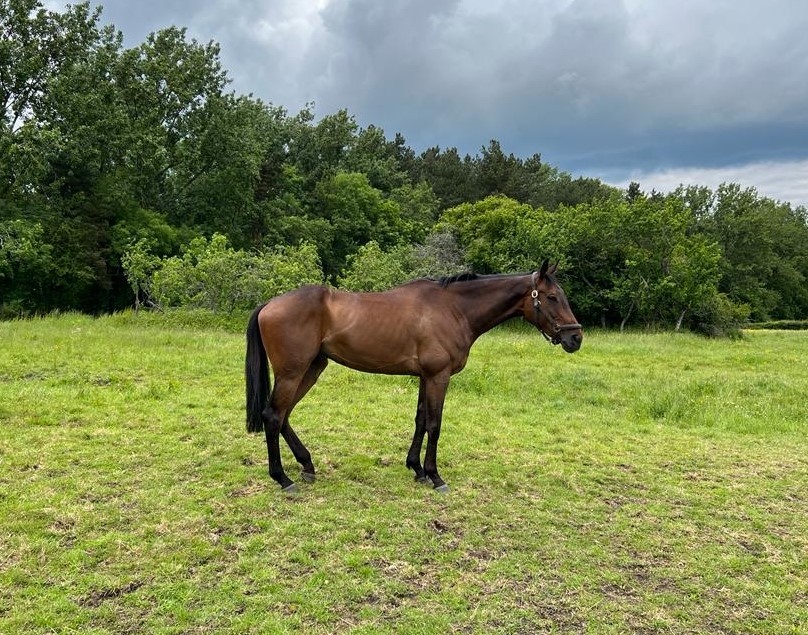 News reaches me a fellow trainer, a big fan of the band the Red Hot Chili Peppers, who had been enjoying a few winners and was out with his team celebrating when he came up with the brainwave of going to one of their concerts and taking his staff with him as a reward for their hard and tireless work.
On his return home late that night he went online and was absolutely delighted and amazed to see that good tickets were only around the £30 mark so he immediately snapped up 10 of these tasty bargains.
The next morning he was trawling through his emails and came across the missive with his concert confirmation. Unfortunately, while the Red Hot Chilli Pipers describe themselves as ‘the most famous bagpipe band on the planet’, it wasn’t quite what he had in mind!
Perhaps the moral of the story is if you do occasionally enjoy one too many bevvies, try not to mix your Peppers with your Pipers!
Be lucky,
DJ
Tagged as: Ayr of Elegance, Cheltenham, Kielan Woods, Notnow Seamus, Racing Club, Stratford
Share this post: